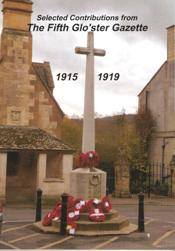 By: Complied, arranged and edited by Anne Crow

In March 1915, the Fifth Battalion of the Gloucestershire Regiment, their ranks swollen with volunteers, sailed to france to take their place at the Western Front. Seeking to raise the morale of his troops, Lt. Col. J.H. Collett launched the very first British regimental trench journal, "The Fifth Glos'ter Gazette" This miscellany has been compiled from the soldiers' cartoons, plays, stories, poems and jokes, along with some powerful remarks by the Editor.