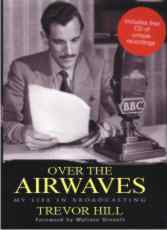 From his first job as that of "Spot FX'' boy on the legendary ITMA, with Tommy Handley and the gang. Trevor became involved with and often played a major role in both radio and te1evision's golden eras, producing and writing for many of the most famous and popular names in show business. With his wife, the writer Margaret Potter, he was heavily involved in the northern edition of Children’s Hour, one of the best loved and most famous of all BBC series, even auditioning a 14-year-old Julie Andrews for her first break! Both Cliff Michelmore and a then teenage Judith Chalmers presented their very first radio and television programmes for Trevor, Judith literally launching the television feature he devised for children aboard the "Royal Iris" paddle steamer, which is still sailing today under the title "B1ue Peter". Retirement did not mark the end of his career, however, as he is often invited back to collaborate in the making of programmes and features about his days with the BBC and with the Overseas Broadcasting Service in Hamburg during and after the Second World War.

Title: Over the Airwave

Type: In stock, ready to ship from B